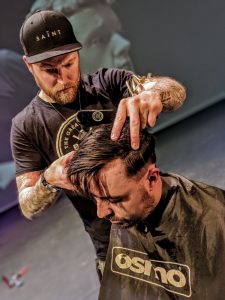 Coming late to the barbering scene Andy started his career in 2015, at the age of 33, after deciding that he had spent enough years of his life doing jobs that weren’t for him and realising his true passion lay in the barbering industry. Taking a chance and leaving his job in property was a scary step but it had always been something he had wanted to do.

Back in the early 2000’s Andy purchased a pair of £20 clippers from Argos and started shaving his own head, he quickly got regular requests from friends to do theirs.
In the years that followed Andy’s hair was his passion! You name a style and he had it – including growing it long and many, many sets of highlights!

Andy worked in several different industries over the years but never really enjoyed what he did. In 2014 everything changed. On a complete whim he bought a ticket for the first ever Barber Bash to be held in Glasgow. He went on his own and felt quite out of his depth, so as most people would do he headed for the bar!

Standing at the bar, surveying the busy room full of strangers, he heard the words, “excuse me mate, do you fancy being a hair model?”. Unknown to Andy at the time, the guy asking this question was Alan Beak, of Ruger Barber, one of the top barbers within the industry around the world.

Andy of course agreed to be his model and it was the best thing that could of happened to him. They quickly struck up a great friendship so when Alan offered to train Andy under his 1 to 1 tuition it was no-brainer. In 2015 Andy left his job in Aberdeen and temporarily relocated to Manchester to follow his dream of becoming one of Scotland’s top barbers. Months of training commenced where he spent long days working at Ruger Barber training under the watchful eye of Alan, while evenings were spent practising the skills he had learnt on a crew of model heads!

Finally he was ready so Andy moved home to Aberdeen at the end of 2015 to begin his career. Andy had decided that if he wanted to make his own mark, and stay true to all he had learnt, he needed his own shop. The next few months were spent preparing and opening his first shop, The 33rd. Just a little over 2 years later, Andy has built the business from a small 1 chair shop to a larger, custom designed shop with 3 barbers and room for more.

There’s been a lot of challenges along the way, and he is sure there will be many more, but it’s his passion for his clients and providing a top quality service that drives him on. The shop now has over seventy 5 star reviews.

As well as his success with the shop Andy is also massively proud to be an educator for The Great British Barber Bash, alongside some of the top barbers in the world.

During all this Andy has also had amazing success in his personal life by getting married and having a beautiful daughter, Evie.