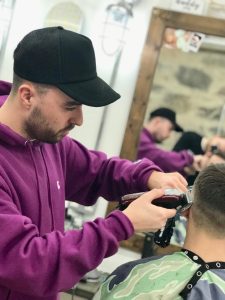 Dan has been a loyal client of The 33rd since the first day the shop opened. He was always interested in the industry, and passionate about his hair, but was already carving a career for himself in oil & gas.

However at the end of 2017 he decided to take a leap of faith and left his job to pursue his personal passion, barbering.

Dan moved to Sunderland to learn the skills of a barber at SB Barber Academy, he graduated in March 2018.

The 33rd were delighted to welcome Dan aboard as a Junior Barber in April 2018. Since then he has been promoted and is now working at the qualified barber status. It is a great honour to see a client become a valued part of the team, he is smashing it!

He is constantly developing the skills he learned by working alongside Andy and attending the many training and showcase events The 33rd take part in. He is perfecting his techniques every day and striving to be the best he can be.